“Getting screened for colon cancer saved my life!” 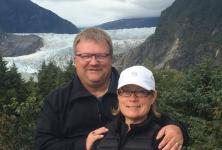 March is Colon Cancer Awareness Month and the South West Regional Cancer Program is encouraging residents in the South West to get checked with a safe and painless take-home test. When caught early, nine out of every ten people with colon cancer can be cured.

Cancer Care Ontario recommends that men and women at average risk between the ages of 50 and 74 get checked for colon cancer with a fecal occult blood test (FOBT) every two years. The FOBT is a safe and painless cancer screening test that checks a person’s stool (poop) for tiny drops of blood, which could be caused by colon cancer. An abnormal FOBT result does not necessarily mean that a person has colon cancer, but more testing with a colonoscopy is needed to find out why there is blood in their stool.

“I’ll be honest – people don’t generally get excited about taking an FOBT test,” quips Dr. Jan Owen, Regional Primary Care Lead for the South West Regional Cancer Program. “I know it’s easier to let the collection kit accumulate dust on your bathroom counter, but the reality is it could help save your life.”

Paul VanBilsen knows a thing or two about FOBT kits collecting dust. He left his kit under the bathroom sink for eight years.

An FOBT kit was in Paul’s hands well before he hit age 50. A family member was diagnosed with colon cancer just a few years earlier and his doctor wanted him to do the test as a precaution. “Like many other men my age I put it off,” he says. “It wasn’t until last Summer when my doctor put another test in my hands that I finally decided to ‘take care of business’.”

Paul was 51 when he was diagnosed with and treated for stage one colon cancer. One canceled summer vacation later and surgery to remove the cancerous tumour, he is cancer-free but will continue to have follow-up scopes to ensure no new cancer develops.

“Unfortunately, Paul’s story isn’t uncommon,” says Jan. “This makes it more important than ever to encourage the men and women in your life to get checked for this disease beginning in their early 50s – even if they have no family history of the disease or if they don’t have any uncomfortable symptoms such as persistent diarrhea or stomach pain.”

Research shows that regular screening using an FOBT, for people who are 50 years of age and older, can reduce deaths from colon cancer. If colon cancer is caught after it has spread to other parts of the body, treating it is harder and less likely to be successful. For people whose colon cancer has spread, as few as one out of eight will be cured.

“Many people don’t realize that colon cancer may be present in the body for a long time before it causes physical symptoms. The role of screening is to catch cancer early because it is highly treatable at that stage,” reminds Jan. “For people over 50, getting checked regularly can improve their chances of beating colon cancer. Men between the ages of 55 and 65 would particularly benefit from getting checked.”

Colon cancer can develop when growths on the lining of the colon, called polyps, turn into cancer over time. People between 50 and 74 years of age without a parent, brother, sister or child who has been diagnosed with colon cancer are considered to be at average risk for the disease and should get checked every two years with the safe and painless take-home test, called the FOBT.

Some people who have had polyps removed from their colon, as well as people with inflammatory bowel disease (i.e., Crohn’s disease or ulcerative colitis), may be at increased risk for developing colon cancer and may need to be checked regularly with colonoscopy instead of an FOBT.

For Paul, the message is simple. “Take care of business and complete the FOBT kit,” he says. “If I had done it sooner, I may not have needed surgery. If I waited longer, things could have been a lot worse. Your life is precious - take care of it!”

Talk to your healthcare provider today about getting checked for colon cancer with a take-home FOBT kit. People without a family doctor or nurse practitioner can get a kit through Telehealth Ontario at 1-866-828-9213, community pharmacies and mobile screening coaches.