New study investigates the role between bacteria and breast cancer 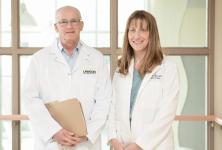 According to the Canadian Breast Cancer Foundation, One in nine Canadian women will develop breast cancer during her lifetime. Many cancers are considered to be the result of inflammatory processes. While inflammation has been a focus of research in breast cancer, the role of bacteria has not.

Drs. Muriel Brackstone and Gregor Reid were collaborators on a study that was the first to describe the breast microbiome, proving the existence of bacteria in human breast tissue. Further research demonstrated that the types of bacteria found in women with breast cancer differ significantly from those found in healthy tissue.

One bacterial species from the cancerous tissue, Escherichia coli (E. coli), is capable of producing low amounts of substances known to cause cancer and induce inflammation, while the bacteria found in healthy tissue, like Lactobacillus, are known to interfere with cancer processes.

“The question is whether we can manipulate this to essentially get rid of more harmful bacteria and replace them with beneficial ones like Lactobacillus,” says Dr. Reid, a Lawson Health Research Institute scientist and Director of the Canadian Centre for Human Microbiome and Probiotic Research.

In this new study, Dr. Brackstone and Dr. Reid will join forces to test their theory that taking an oral probiotic lactobacilli will lead to these organisms reaching the breast tissue, displacing harmful bacteria and reducing inflammation.

Drs. Brackstone and Reid will compare bacteria from the breast tissues of women at risk for breast cancer who are taking the probiotic against those at risk who are taking a placebo. They will also compare to the breast tissue of healthy women who are not at risk. The research participants will provide nipple and needle aspirates for their bacteria to be analyzed both at the beginning of the study and after three months of either taking the probiotic or a placebo. The samples will also be tested for inflammatory compounds, levels of heavy metals and pesticides that may influence cancer risk.

“I think this study will shed light into what actually occurs in the milk ducts where most breast cancers originate,” says Dr. Brackstone, a Lawson scientist, surgical oncologist and medical director of the London Breast Care Clinic. “If successful, this project could lead to larger studies and contribute to a new way of approaching breast cancer management.”