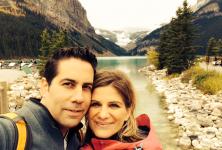 When she noticed a loss of appetite, dramatic weight loss, and more frequent trips to the washroom; Joanne Photiades knew something was wrong. As many of us do, she took to the internet to research her symptoms. Over and over, she was led to the same website; one focused on ovarian cancer.

“I had none of the risk factors and there was no history of cancer in my family, so I figured it wasn’t possible,” says Joanne.

Pictured right: Joanne poses with and her husband Dennis.

Nonetheless, she went for blood tests. When they came back normal, she requested an ultrasound. Results showed a growth on one of her ovaries and following an MRI, Joanne was referred to the care of a gynecologic oncologist. She was soon waitlisted for surgery to remove her left ovary along with an 18 x 20 cm tumour. Weeks later, Joanne was diagnosed with ovarian cancer.

“Thankfully it was contained. But I kept thinking that if my health can go wrong, anything could go wrong. The feeling was paralyzing,” she recalls. “I was afraid to leave the house by myself and became fearful of just about everything.”

Joanne found comfort in the company survivors, as well as a guide she received from Ovarian Cancer Canada. Knowing that she wasn’t alone in her journey gave her the strength she needed to define a new normal.

Tragically, most women who are diagnosed with ovarian cancer are not expected to live longer than five years past their diagnosis. With no reliable screening test for the disease, and symptoms that are often confused with those of other conditions, ovarian cancer is notoriously difficult to detect. As a result, it is usually found in its late stages when the cancer has spread.

Today, Joanne is healthy and pregnant with twin boys due later this summer. Under the advice of her gynecologic oncologist, she is contemplating a full hysterectomy following delivery to help reduce risk of the ovarian cancer returning.

Depending on her recovery, Joanne aims to participate in the Ovarian Cancer Canada Walk of Hope. Held every September, the event brings together those affected by ovarian cancer to rally for important changes that will enable better outcomes.

“My story is one of hope, but it’s not the norm. Life is random and there are no guarantees, particularly when it comes to ovarian cancer,” says Joanne. “We are in this together and I want to give back to the community that was there for me so that more women with ovarian cancer will live longer and stronger.”

According to Ovarian Cancer Canada, five Canadian women die from this disease every day. September is ovarian cancer awareness month and the community is working to ensure that people everywhere learn more about this disease, to further efforts many are joining the Walk to raise much needed funds.

What you need to know about ovarian cancer

All women are at risk for ovarian cancer. However a woman is at higher risk if:

Ovarian Cancer Canada recommends speaking to your doctor if you notice new symptoms that persist for three weeks or longer.